Pyramid schemes are a type of multi-level marketing company that have been around for years. They are designed to pay more for recruiting new members or distributors than it does for selling an actual product. In other words, these schemes promise large profits to investors for recruiting others. While some pyramid schemes may be legitimate, most of them are scams. In this article, we will take a look at the most famous pyramid schemes that scammed investors out of their hard-earned money.

What is a pyramid scheme?

What are the red flags of a pyramid scheme?

There are several red flags that you should be aware of if you think you may be involved in a pyramid scheme. These include:

Are pyramid schemes the same as Ponzi schemes?

Pyramid schemes are sometimes called Ponzi schemes. Both pyramid and Ponzi schemes are types of investment scams that involve promising investors high returns with little or no risk. However, there is one key difference between the two:

Both pyramid and Ponzi schemes are illegal in most countries.

Why is it called a Ponzi scheme?

The Ponzi scheme is named after Charles Ponzi, who ran a pyramid scheme in the early 1920s. Ponzi promised investors that he could double their money within 90 days by investing in international reply coupons. These coupons were used to buy postage stamps from other countries and then sold at a profit in the United States. However, Ponzi was not actually investing the money as promised. Instead, he was using money from new investors to pay returns to earlier investors.

What are some famous pyramid schemes? 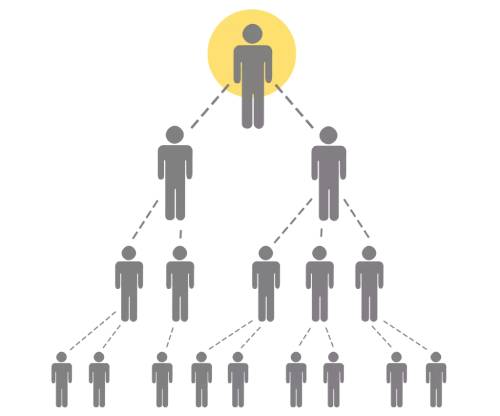 Now that we've covered what a pyramid scheme is and how to identify one, let's take a look at some of the most famous pyramid schemes in history.

The most famous pyramid scheme in recent history is Bernie Madoff's Ponzi scheme. In this scheme, Madoff promised investors huge returns if they invested with him. However, instead of investing the money, Madoff simply used the money from new investors to pay off the old investors. This scheme eventually collapsed, leaving many people out of pocket. Madoff was sentenced to 150 years in prison.

One of the most famous pyramid schemes is Amway. Amway is a multi-level marketing company that sells health, beauty, and home care products. The company was founded in 1959 and is based in Ada, Michigan. Amway has been the subject of numerous lawsuits and investigations for allegedly operating as a pyramid scheme. In 2010, the company agreed to pay $56 million to settle a class-action lawsuit that accused it of being a pyramid scheme.

Another well-known pyramid scheme is Herbalife. Herbalife is a multi-level marketing company that sells health and wellness products. The company was founded in 1980 and is based in Los Angeles, California. Herbalife has also been the subject of several lawsuits and investigations for allegedly operating as a pyramid scheme. In 2016, Herbalife reached a $200 million settlement with the Federal Trade Commission over allegations that it was a pyramid scheme.

One example of a famous pyramid scheme is LuLaRoe. LuLaRoe is a multi-level marketing company that sells women's clothing. The company was founded in 2012 and is based in Corona, California. LuLaRoe has been the subject of numerous lawsuits and investigations for allegedly operating as a pyramid scheme. In 2019, the company agreed to pay $49 million to settle a class-action lawsuit that accused it of being a pyramid scheme.

Other examples of pyramid schemes include:

Pyramid schemes are illegal in many countries around the world. In the United States, the Federal Trade Commission has taken action against several companies for allegedly operating pyramid schemes. If you think you may have been scammed by a pyramid scheme, you should contact your local law enforcement or consumer protection agency. You can also file a complaint with the FTC.

Be sure to do your research

If you're thinking about investing in a multi-level marketing company, be sure to do your research first. There are many legitimate companies out there, but there are also many pyramid schemes masquerading as legitimate businesses. Don't let yourself be scammed by one of these schemes.

One of the top sources of information on whether a money-making program is legitimate or a scam is I Buy I Review. We buy and review online courses and programs to determine if they're worth and investment of your hard-earned money. Check out our review of Symmetry Financial Group.